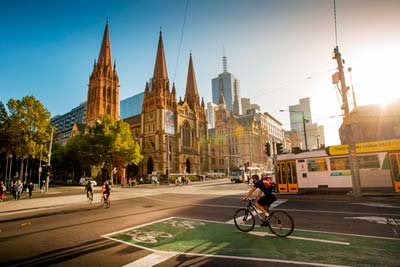 Get on your bike!

At Ozford, we believe that riding a bike is a great way to stay fit, save money and to freely explore Melbourne.

According to a study by Scientific American, a human with a bicycle is the most efficient being on the planet. This notion was the inspiration for Steve Jobs to plough ahead with his concept that later became Apple.

The added advantage of living in Melbourne as a cyclist, is that it is relatively flat with few steep hills and lots of designated bike paths.

If you want to purchase a bike, you get score a great bargain on Facebook Marketplace, Gumtree or otherwise, you can visit any one of the bike stores across Melbourne.

If purchasing the bike is off the cards, there is also the option to bike share. You will see the brightly coloured Lime bikes scattered across Melbourne. These work on a share basis whereby, cyclist will need to download the Uber app and scan the QR code that is displayed on the bike. It will give you instructions about how to ride safely and has a safety helmet supplied.

You’ll need to consider bike rider safety for not only yourself but for the community as well. Here is some information about sharing roads and footpaths, riding at night and wearing helmets.

Helmets are mandatory in Australia and despite them feeling uncomfortable, somewhat unfashionable and sometimes cumbersome to carry around with you, they are a part of cycling in this country and everyone you meet who rides a bike, will most certainly be carrying one around with them.

However, helmets needn’t be unfashionable! Here are some really stylish brands that will not only keep you safe but will look super cool! Nutcase Helmets, Thousand, Bern and Yakkay.

Stay safe and happy riding from all of us at Ozford!